The Leidseplein square is one of Amsterdams main squares in the city center. It attracts thousands of visitors each day, since there is a lot to do.

1. What is the Leidseplein Square?

Once this square was the end of the city center and the beginning of the road to Leiden. In the 17th century people stalled their horses and carriages here. Nowadays thousands of visitors are passing this square each day. Street performers try to entertain people in exchange for a small tip. Around the square there are many bars and restaurants, terraces, coffeeshops, theaters and hotels. From the early morning till the late evening there is a lot to do. 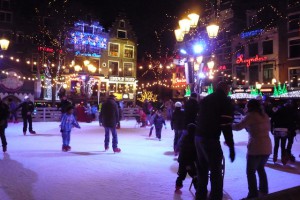 On the square there aren’t much attractions to visit, other than bars, restaurants and clubs. In the summer time there are many street performers on the east side of the square. Daily they show their soccer skills, breakdance skills, capoeira skills and many other entertaining performances. While the east side is filled passing public and street performers with their admirers, the west side is full of people sitting on the terraces. In the winter period, the east side is quite empty and many people are sitting inside the bars. In this time of the year people are ice skating and enjoying some glühwein, on the yearly winter fair.

Close-by you can find some popular and less popular attractions to visit. Heineken Experience is roughly 15 minutes walking distance. Closer to the Leidseplein you can visit the Vondelpark, the Holland Casino or the Max Eeuweplein square. At the canals there are several peers, where you can do hop on a canal cruise or get on an entertaining canal bike ride.

The nightlife at Leidseplein

As one of the most lively entertainment squares on Amsterdam, the Leidseplein square has a high valuable nightlife. On and around the square there are bars, pubs, cinema’s and theaters to entertain all kinds of people.

The party people will leave to bed satisfied, after a night out at the square. The density of venues to party is very high. You can find small cafes as well as large clubs, such like: Melkweg, Paradiso or Bitterzoet. There is also a street with mainly party cafes, which is the 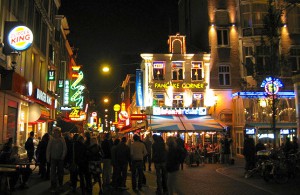 Those who are not seeking for a party night out can also be very well entertained easily. The Melkweg and Paradiso also organize music concerts, besides the party nights. The more culturally interested people, can visit the theaters such as: Stadsschouwburg (Municipal Theatre), DeLaMar theatre and Theater Bellevue. Besides these venues, you can also try to test your luck at the Holland Casino. You can also laugh your but of at the comedy cafe. Both are located at the Max Eeuweplein square.

The square is about half and hour walking distance from the Central Station. From this central point in the city you need to follow the streets: Damrak, Rokin and Leidsestraat.

You can catch trams 1, 2 or 5, these tram lines should take approximately 15 minutes.

From ring A10 you can either leave the highway at s114 and follow the city ring s100, or leave at s103 and follow the ring s100. You can park your car on the streets in the area or in a parking.

Did you Apple has one of their stores housed here.

5. Photos of the Leidseplein square 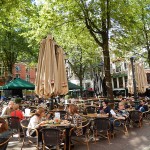 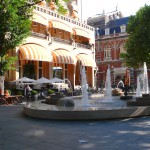 The Leidseplein square is located at the end of the Leidsestraat and between the streets: Marnixstraat and Weteringschans.