The Museumplein square is a large square in the middle of all main museums of Amsterdam. It is located at the Museum quarter in the south of Amsterdam and it is often the location for big events in the city.

1. What is the Museumplein Square?

It is hard to believe, but this square occupied by farms until the late 19th century. This changed with the construction of the Rijksmuseum. The municipality decided to assign this area to art and culture. This is why there is such a high density of museums on the square. With the presence of the Concertgebouw (concert building), this area is the real cultural center point of the city. Besides these cultural hotspots there are also embassies and large luxurious offices located on the square.

As the cultural center point of Amsterdam, there are many attractions to be find on and around the square. Besides those, the square houses many big events that attract thousands of visitors. Have a look at the agenda, to see if there is one coming up while you are visiting Amsterdam. 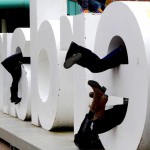 The iAmsterdam signs are statues with the text ‘IAMSTERDAM’. The signs are very popular in Amsterdam and many people make a photo on, behind or in front of the signs. There are three of these signs spread over Amsterdam. Two of those are at fixed places and one moves around squares in the city. The ones at the Museumplein square and the square at Schiphol Airport.

This is one of Amsterdams most popular museums. Daily it has queues to get in the museum, which is fully dedicated to the painter Vincent van Gogh.

A museum not to miss on your trip. The Rijksmuseum is houses in a 17th century architectural work of art, surrounded with a fantastic garden. The inside houses a wide range of Dutch art history, with Rembrandts the Nachtwacht (night watch) as the icing on the cake.

The name already says enough. This museum is all about diamonds. Here visitors will be informed about diamonds in general, but you can also do a diamond workshop. Of course it is also possible to look at the great artworks, made from diamonds.

This is building of the Stedelijk museum is an attraction itself. A classical building merged with a contemporary new part. Inside the museum you can gaze at (strange looking) contemporary art.

This is Bols’ version of the Heineken Experience. Bols is a popular jenever brand, that finds it origin in the Netherlands. Here you will be informed about the history of the brand and the drink itself. As you can expect from an experience, you can taste, smell and shake a Bols drink.

This is by far the most popular park of Amsterdam. In the summer it is full with all kinds of people sitting and just hanging around. Often street performers are showing their tricks here.

On and around square there some shopping streets situated. Besides the Leidsestraat, which is a 5 minute walk, you can find the P.C. Hooftstraat. This the high end retail shop of the city. Here Gucci, Prada, Tommy Hilfiger etc. established on of their stores. If you like fancy cars, then you’ll be pleased here, as very expensive cars are parked here. Another luxurious street to shop is the Van Baerlestraat, which is located on the south-west side of the square.

The Concertgebouw is popular for its musical artworks. The halls are known for their spot on acoustics and therefore over 400 performances are held here yearly.

The square is about 40 minutes walking distance from the Central Station. From this central point in the city you need to follow the streets: Damrak, Rokin, Leidsestraat, left on the Stadhouderskade and then it’s behind the Rijksmuseum.

You can catch trams 16 or 24 from the Central Station. These tram lines should take approximately 20 minutes.

From ring A10 you can leave the highway at s108, this should bring you to the Museumplein. You can park your car on the streets in the area or in a parking.

There is a peer close-by, which allows you to reach this location with a hop on hop off canal cruise.

Did you the Museumplein square was designed by a Danish architect.

5. Photos of the Museumplein square 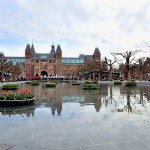 The Museumplein square is framed between the streets: Van Baerlestraat, Paulus Potterstraat and Johannes Vermeerstraat.