The Rembrandtplein square is one of the busiest squares in the center of Amsterdam. Daily many tourists pay a visit to this centrally located square. Many trams and buses have stops at the square and the square is literally surrounded by entertainment. 1. What is the Rembrandtplein Square?

The Rembrandtsplein is a square located in the center of Amsterdam. The square is named after the world famous Dutch painter: Rembrandt van Rijn. As many city squares this square was also used as a trading place, many decades ago. Until the late 17th century farmers traded their dairy. You can find many bars, restaurants, terraces, clubs and hotels. In the middle of the square there is some greenery with some seatings. Most attractive sight on this square is a large bronze artwork, which is a version of Rembrandts the Nachtwacht (night watch).

As the Rembrandtplein square is mainly used for entertainment purposes, you shall not find much more other than bars, restaurants and clubs. Popular day attraction at the Rembrandtplein square are the Xtracold Ice Bar and the bronze statue of the Nachtwacht, but there are many attractions in the surrounding area, such as: the Bloemenmarkt (Flower market), the Jewish Quartier, the Kalvertoren, the Kalverstraat, the Stopera, the Royal Carré, the Torture Museum and many more.   At night you can visit the square for a nice dinner or have drink on one of the many terraces and watch the passing people.

3. The nightlife at Rembrandtplein

As one of the most lively entertainment squares on Amsterdam, the Leidseplein square has a high valuable nightlife. On and around the square there are bars, pubs, cinema’s and theaters to entertain all kinds of people.

Party till you drop

Main clubs are Club AIR and the Escape. Besides these there are also some smaller clubs, such as: De Kroon, Studio 80, Rain, Club Home. Further there are many more smaller cafes. You can have a look at this list for an overview of the clubs at Rembrandtplein square.

Amsterdam is a liberal city and people from Amsterdam are proud of this. Here it is ok to be yourself, this is probably why the gay scene in Amsterdam is big. At Rembrandtplein there are several bars focussing on gay people. Starting on the edge of the square, you can find the Reguliersdwarsstraat. This is a street with many bars, restaurants and clubs, for gay(-minded) people. There is even a gay bar focussing on arabic gay people.

At the Rambrandtplein square and in the surroundings there are several places to get entertained. You can find the Kleine Comedy, which is a small theatre at the Amstel river. You can also try your luck at the Merkur Casino or you can catch a movie at Amsterdams oldest cinema: Tuschinsky. Looking for a more classical performance, then you can find out whether there is event coming up at the Royal Carré or the Stopera.

The square is about 20 minutes walking distance from the Central Station. From the station you need to follow the streets: the Damrak, the Rokin and the Reguliersbreestraat.

You can catch trams 4 or 9, these tram lines should take approximately 10 minutes.

From ring A10 you can leave the highway at s116. If you keep driving straight ahead, you’ll bump into your destination. You can park your car in a parking, as parking around the square is almost impossible.

There is a peer for a hop on hop off canal cruise at the Amstel river. This makes it also easy to reach this location by boat.

Did you know untill 1875 the name of the square was Botermarkt (Buttermarket).

6. Photos of the Rembrandtplein square 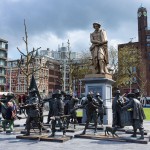 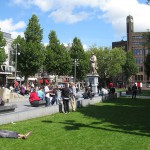 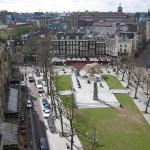 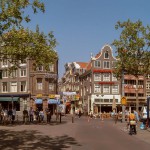 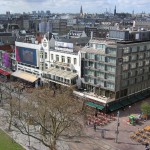 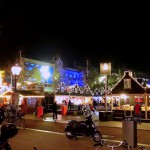 The Rembrandtplein square is enclosed between the Herengracht, the Amstel river and the Vijzelstraat.