The Jordaan area together with the Pipe area are one of Amsterdams most popular places to live at. People are struggling to find affordable houses here, since the demands are increasing the prices. These areas also are very interesting for the tourists of Amsterdam. We’ll let you know why.

1. What is the Jordaan Area?

The Jordaan is a residential area, to the west of the Amsterdam Central Station. The area started to be built in 1612 and initially was developed for workers and immigrants. After the second World War this district got very deteriorated and Amsterdam decided to renew and redevelop the district. This became the new era for this district, as many people from other social classes began to live here. Nowadays still many people from Amsterdam love to live here and house prices belong to the highest of Amsterdam.

A tour through the Jordaan is quite an experience. Although the area has been renovated and renewed here and there, you’ll still see a lot from the past. At the Brouwersgracht there are still a couple of old bridges and old storehouses with the characteristic blinds, which gives a feel of Amsterdam history. Walking around the area also reveals many streets with old facades, typical bruine cafe’s (brown cafes) which are local typical Dutch cafes, houseboats and some main attractions. Icing on the cake should be its great culinair offer and exciting nightlife.

This is a canal with many old storehouses. Many of these houses have a monumental status and therefore history is well preserved. The scenery of the houses, houseboats and bridges are very unique.

Just on the edge of the Jordaan is the Anne Frank House located. This is one of the best visited attractions of Amsterdam. The Anne Frank House was the hiding place for the Jewish girl Anne Frank during the second World War, before she was caught and deported to the concentration camp of Auschwitz.

Westermarkt is a square on the edge of the Jordaan. On this square you can find the Westerkerk, which is a church from the 17th century. During the summer months it is possible to climb the tower of the church to the balcony. At this balcony people can enjoy a great view over the city.

The Noordermarkt is a public square in the Jordaan, surrounded by terraces. Two days a week the square offers a place for a marketplace, with various goods to buy.

The Lindengracht is translated to Linden canal. On it self this is quite odd, since there is no canal running through this street. Until the end of the second World War there actually was a canal running through this street, but due poverty and overpopulation the canal stank too much. So the city decided to close these stinky canals and they became regular streets. Nowadays the Lindengracht is popular for its weekly market on Saturday.

Just around the corner of the Noordermarkt is the Westerstraat located. This is a main street in the Jordaan, with all kinds of bars, restaurants and shops. Once a week there is a specialty market held on Monday.

This is a square at the end of the Elandsgracht. On the square famous artists from the Jordaan are honored with statues.

Do you want to know what it is like to live at a houseboat? Then you should visit the Houseboat museum. This is a tiny museum that gives an impression of how it feels like to live on the canals of Amsterdam.

Restaurants at the Jordaan

The Jordaan area is very populair for its restaurants. The amount of restaurants per square meter belongs to the highest of Amsterdam. In this area you can find all sorts of restaurants and cafes, from Dutch to Indian and from Italian to Ethiopian.

Nightlife of the Jordaan

When the evening falls the Jordaan gets filled with people from all over the city. Although there aren’t bars and cafes to dance, it’s still very popular. People like to go out in the Jordaan to have dinner at one of the many restaurants. After their dinner they like to have a drink on one of the many terraces or order some drinks in on of the many small cafes and bars.

From Central Station you should walk to the west, towards the Singel canal. Once arrives at this canal, take the first to the right. This brings you to the Brouwersgracht, which leads you to the Jordaan.

Take tram lines 13 or 17 and leave at the stop Rozengracht, which should take you less than 10 minutes. The Rozengracht is quite centrally located in the Jordaan.

It is approximately a 10 minute journey from the Ring A10. Leave the ring at exit s103 and follow the signs for city ring s100. The Jordaan starts at the beginning of the s100 city ring.

Did you know that in the 18th century, due poverty, many canals in the Jordaan smelled so bad that they were closed.

5. Photos of the Jordaan area 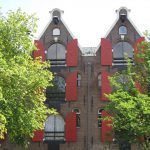 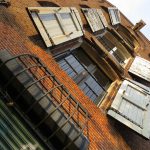 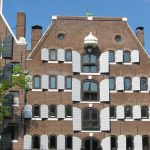 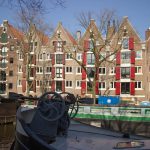 The Jordaan area is embedded between: the Brouwersgracht, Nassaukade, Leidsekade and the Prinsengracht.