1. What Is The Red Light District Amsterdam? 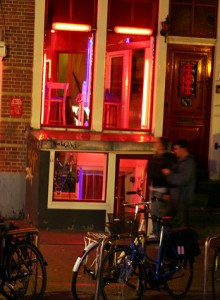 Amsterdam is the real city of all sins. There is an abundance of sex shops, coffeeshops (weed shops), sex theaters, legal prostitution and so much more. This is all centralized at the Red Light District, which is locally known as De Wallen or De Rossebuurt. Here you will find ladies who offer their personal services from behind red colored windows. As many ladies try to seduce men to visit them, you should be aware of the blue colored windows. Here and there you can find these blue colored windows, but they are not occupied by women. In fact you should know that they are occupied by transvestites and transgenders.

When night falls it gets very crowded with loads of people having a great night out with friends or seeking for a happy time. Some people warn others for the dangers of this area by night, but to be honest you just need to be aware of some details. It isn’t unsafe to walk through the Red Light District Amsterdam, but you need to keep this in mind:
– Be respectful and do not take any photos of the ladies behind the windows. This is for their privacy and your safety.
– Try to avoid small alleys when you are by yourself.
– As every crowded place, you should beware of pickpockets.
– When you plan to use drugs, don’t buy it on the streets.

Tip: You can join a guided tour through the Red Light District and you’ll get to know all insight information.

3. What Are The Popular Attractions?

Of course a walk at the Red Light District is a attraction on itself, but there are some very popular attractions in this area. Above all you will find many sex shops, selling the strangest sex toys. Among all these shops there is worlds first and condom only specialty shop, called the Condomerie. Drugs tourism is also large in this area, since there is a high density of coffeeshops (weed shops) located here. Inside the oldest part of Amsterdam you’ll also find the oldest coffeeshop of the city, which is the Bulldog.

At night many people are seeking for some sexual excitement, or just want to experience the feel of the red lights. To get this feel many people visit the Casa Rosso, which often has queues to get in. Here you can look to live sex performances of couples. An other very famous venue is the Bananen Bar (Banana Bar). Here visitors can witness how ladies do tricks with… Yes, indeed!

Don’t be disappointed when the sun starts to rise, because at broad daylight there is also a lot to see. As the Red Light District belongs to the oldest part of Amsterdam,  you can expect to see much history here.

In the period that it wasn’t allowed for catholics to hold public church services, the locals created a clandestine church. This church was realized at the attic of a large canal house, which they named: Ons’ Lieve Heer op Solder (Our Dear Lord in the Attic).

This is a kodak worth sight. Oudezijds Kolk is a narrow canal, with only one quay. On the other side of the canal they directly built canal houses. For those who also visited Venice, will see the similarities.

Amsterdam has a few local breweries and brewery de Prael is one of them. Their beers are quite popular among locals. The brewery is open for public and the organize guided tours and tastings.

Nieuwmarkt is a square large square at the end of the Zeedijk. In the center of the square there is the Waag and the square is surrounded by monumental buildings and many restaurants.

Oude kerk (Old Church) is is the oldest still existing church of Amsterdam. The church is established in the 13th century and belongs to Hollands top 100 monuments.

Walking around the Red Light District, you would probably be missing this sight. The Trompettersteeg is narrowest alley of Amsterdam, since it is no wider than a meter.

It is very easy to get to the Red Light District. Just walk to the east side of the Central Station and cross the main street: Prins Hendrikkade. Behind the church, you’ll see from the station, you shall find your destination.

No need to take public transport, as you can walk from the Central Station.

It is not recommended to go to this place by car. You could try to park your place somewhere near the Central Station.

Did you know there are an estimate of 5.000 up to 8.000 prostitutes working in Amsterdam. 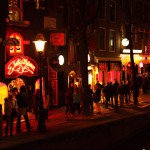 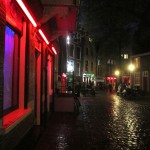 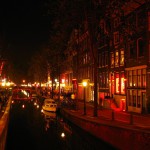 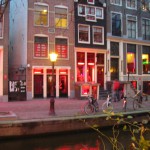