As a non local, you probably will stay in the center of Amsterdam. This makes it very uncomfortable to use a car in Amsterdam. Finding a parking place is very difficult and most of all very expensive, as you can pay approximately 5 EURO per hour. It is therefore highly recommended to make use of public transport servies in Amsterdam. But how to use the public transport in Amsterdam?

Transportation from Schiphol airport to Amsterdam

Amsterdam is a true transport hub. All type of transports have a connection with Amsterdam: the airplane, the train, the bus and the boat (cruise ships). Between all options the majority of the people who visit Amsterdam are arriving by airplane. Since flying is the most popular way to come to Amsterdam, the majority of the visits start at the Amsterdam Schiphol Airport.

After a long flight it can be annoying to find out how to get to your destination. Some people therefore will prefer to use the taxi, because this is the easiest type of transport to their destination. However you could save out a taxi ride to Amsterdam, since the public transport is perfectly organized.

How to get to Amsterdam from Amsterdam Schiphol Airport? 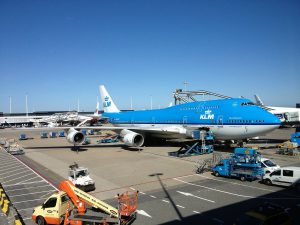 There are also very convenient direct connections to other main cities in the Netherlands, like Rotterdam, Utrecht or the Hague.

The center could easily be explored by foot or bike. Though for some journeys using the public transport is highly recommended.

How to use the public transport in Amsterdam? 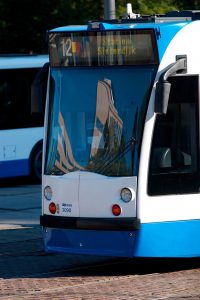 Buses and trams
In Amsterdam it is common to make use of the bus and tram connections for relatively short distances. These trips are mainly made for journeys within the city ring (Ringway A10). These type of transports have many stops in each part of the city.

Metros and trains
These type of transports are often used for longer distances. They mainly used for journeys between the inside of the city ring, to the outer parts of Amsterdam. Since the trains don’t have as many stops as metros and run less often, the metro is the more preferred type of transports for these kind of journeys. Mostly the trains are used for connections between other cities in Netherlands.

Ferries
Amsterdam is divided in two parts, by the IJ river. To the south of this river there is the main part of Amsterdam located, with the city center. To the north of the IJ river there is the more newer part: Amsterdam North. Between these parts there are tunnels, but those are only available for motorized traffic. Therefore the city of Amsterdam has organized ferry connections to several parts of Amsterdam North. A big plus, the use of the ferries are free. Moreover, the cross over to this part of city has some entertaining value. The view from the ferry are beautiful.

Click on the thumbnail to see the enlarged map of Amsterdam. With this detiled map it is fairly easy to schedule your trip.

Transportation from Amsterdam to surrounding areas

Outside Amsterdam there is a lot to see in the surrounding areas. Often tourists make use of guided tours. If you don’t like those tours or if you do just want to save out some euros? Then you can just go by train, which is very easy to use. In general people use the train to reach surrounding areas, such as Haarlem or Utrecht. Most of the surrounding areas even have direct train connections, without the hassle of taking transits.